Quality Breeders will most likely ask the questions, “So why an American Bulldog? And, have you ever had or know anyone who had one?”

The American Bulldog is a descendant of the popular Old English Bulldog. They are gentle in spirit, intelligent and eager to please. They show strong protective instincts when it comes to their family members. However, be aware that they can be a bit standoffish when meeting strangers and other dogs that are not part of their circle.

Learn more about the difference between an American Bulldog and a Pitbull here.

These rather large, bulky dogs are very loving and affectionate and can behave like lapdogs! It can be disconcerting to be awakened by a licking and wiggling Bulldog bouncing on the bed.

American Bulldogs are mostly white with accents or patches of brindle, fawn, and brown or red. Sometimes they can be a trendy reverse brindle, but dog breed standards do not embrace the darker color as yet. They have expressive almond-shaped eyes that vary in color. 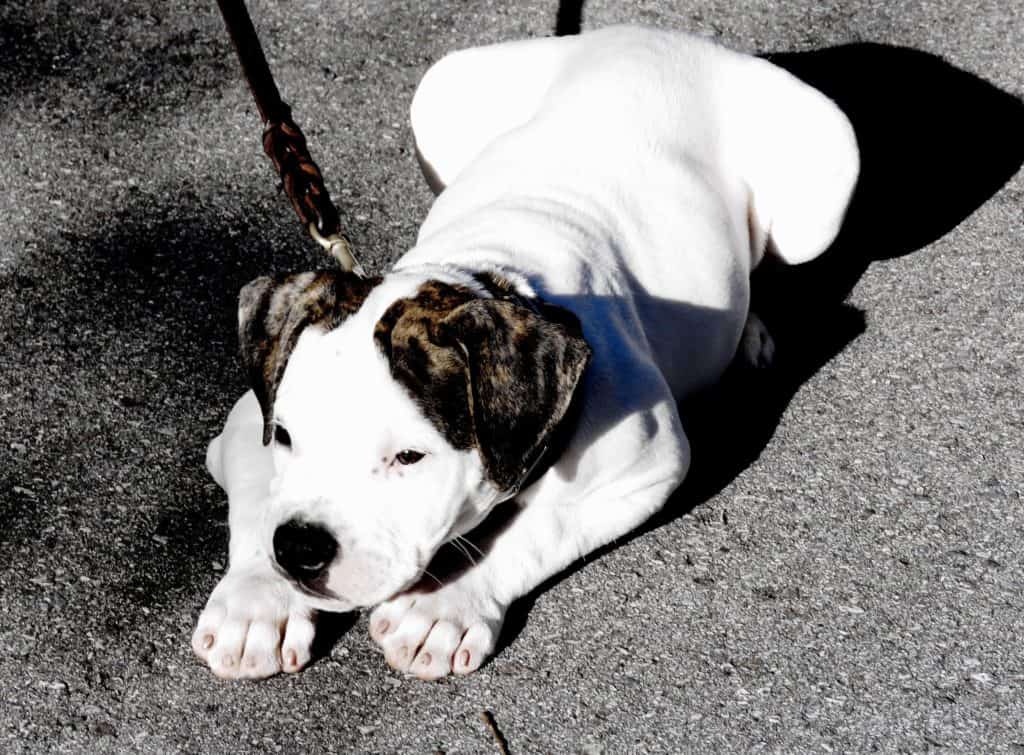 Beau is just a 4-month-old puppy here. He shortly grew to be much taller than his playmates at the dog park.

The American Bulldog’s energy is high on the scale of dog breeds, so having a sizable yard or a park nearby is a must. These dogs thrive on long walks with dedicated and active pet parents. Joggers or runners will thoroughly enjoy a loyal, protective American Bulldog by his or her side.

Consistent behavior training is necessary for this breed to remain happy and gentle. A trained puppy that grows up in a family setting will do very well with children and other pets. Socialization for any breed of dog is needed, but even more so for American Bulldogs.

Care Tips for an American Bulldog:

The original American Bulldogs came to North America by way of working-class immigrants. The breed’s agility, intelligence, and loyalty made them useful on farms as livestock protection dogs and for hunting feral pigs. Although their exact ancestry is unknown, it’s likely that they were a mix of the Old English Bulldog and perhaps a St. Bernard, Boxer, or Pointer.

Unfortunately, American Bulldogs were also used for bull-baiting and almost became extinct around the end of WWII. In the 1940’s two breeders, Alan Scott and Brian Johnson, gathered some of the surviving dogs off of Southern farms and revived the line. Scott bred the standard American Bulldog and Johnson created a bigger type known as the Bully. These sensitive dogs are now enjoyed as family friendly companions.

close
close
Start typing to see products you are looking for.