Fall is pumpkin time, no doubt! In my house, pumpkin is a favorite all year round, especially for my beloved four-legged companions. Pumpkin dog treats seem to offer both health and fun.

Most of us don’t use the pumpkin innards to add to our pet’s food after we carve scary faces on them. Instead, it’s much easier to pick up a can of plain pumpkin puree from the store with no added seasonings. As I mentioned in my recent blog Why Fiber for Fido? canned pumpkin is a great addition to your dog’s meal, often added to improve his stool. Here at Vital Planet, we’ve even formulated a product called Firm Stool that has pumpkin as one of its ingredients! We pet parents certainly appreciate a healthy dog poop, don’t we?

With that intention “firmly” in mind, I decided to have fun with a friend of mine and get a little creative. We did some research I’ll share with you regarding grain-free pumpkin dog treats. We even baked up a batch! I was truly amazed at how simple and quick the whole process was. 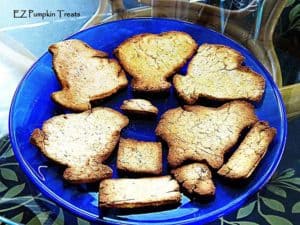 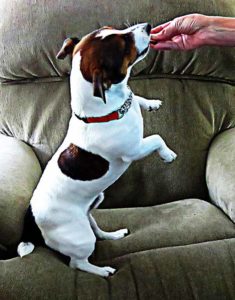 We sampled these ourselves and they were delicious. Nothing but good ingredients in these treats. And I’m very happy to report that Buck agreed wholeheartedly!

Did you know that coconut can improve the condition of your dog’s skin and coat?

I also discovered these other delicious and nutritious grain-free pumpkin treats on my quest. Check them out and let me know how you like them!

This recipe was interesting in that it used garbanzo flour instead of coconut. It also included peanut butter. This blog suggested that you could substitute quinoa, amaranth or potato flour as well.

Note on using nut-butters – always purchase plain and unsalted for your dog. The sweetener xylitol is actually poisonous for our pets and salt and other sweeteners are generally unhealthy for them too. Personally, I like to use almond butter even better than peanut butter, and my dogs approve too.

As the title suggests, an interesting ingredient is apples in the form of applesauce. The base is coconut flour and I really liked the idea of adding cinnamon. Cinnamon has been found to soothe stomach issues, help to regulate blood sugar, and improve overall digestion.

Note – sweet potato can be substituted for pumpkin. It is also high in fiber and vitamins and adds a delicious natural sweetness. Like pumpkin, it has also been found to be helpful for dogs with both diarrhea and constipation.

This recipe is essentially a nut butter mixture with a base of coconut flour, and of course, pumpkin puree. I was most interested in the addition of both cinnamon and turmeric. We just discussed the healthful benefits of cinnamon. Add in turmeric which is well-known for its helpfulness in supporting joint health and comfort in movement. I’m curious how much turmeric would impact the taste of the treat. Definitely worth a try!

Symptoms and Causes of SIBO and SIFO – post 2 of 3

Facebook
Today let’s continue our conversation about SIBO and SIFO and take a further look at the symptoms and causes of these two very uncomfortable conditions. Again, I may refer to...

END_OF_DOCUMENT_TOKEN_TO_BE_REPLACED

Facebook
Cancer and constipation. What do those two have in common, except for the fact that they both begin with the letter “C”? October is Breast Cancer Awareness Month,...

END_OF_DOCUMENT_TOKEN_TO_BE_REPLACED

Facebook
Digestive issues seem to rear their ugly heads most intensely around the holidays. Crazy schedules, lots of party appetizers, “gifts” of sweets and cookies, and well-intentioned feasts filled...

END_OF_DOCUMENT_TOKEN_TO_BE_REPLACED

Facebook
Loose Stools. What an unpleasant thought, especially when it’s your dog who is afflicted. Your sweet pup can’t tell you what is wrong. Does he have pain in...

END_OF_DOCUMENT_TOKEN_TO_BE_REPLACED

Facebook
Throughout history, dogs have evolved as hunters and scavengers – and their digestive systems adapted to eating the organ meats of their prey raw. This included the prey pancreas, liver,...

END_OF_DOCUMENT_TOKEN_TO_BE_REPLACED

close
Start typing to see products you are looking for.